My recent post on how to best support early literacy in bilingual children brought about a few comments on the topic of different scripts.

This is an interesting one because it adds a new dimension to literacy; a new worry about potentially confusing the child. I'm sure it is a worry we all have - whether it's between the two languages spoken, the two languages read and written, or the two scripts used.

When I was a young child (maybe 8 years of age - I'm not sure) I got interested in the Greek alphabet. I'm not sure where I saw it, but I saw it, and wanted to learn it. I didn't give my dad peace until he taught me the whole Greek alphabet (I can still recite it now!). Considering I only learned to read and write at 7 (which is normal in Germany), it was close to acquiring literacy. Did it confuse me? Not at all. I remember that I found it reasonably easy to learn because the script was similar in principle and shape. Many years later, when I learned Russian (which has a script based on the Greek alphabet), it helped me learn to read Russian and enabled me to skip a full term of tuition (the script is usually taught first) through a mere 2 weeks of self study.

From the anecdotal example of how I felt about these scripts, learning a second script in early childhood, like learning a second language, is an asset rather than a hinderance. So I wouldn't worry about confusion - there may be some at the start, but it'll be so worth it.

Cubling's nursery is lucky to have some speech and language support and they actively support bilingualism. Part of their early literacy development is actually showing other scripts and letting all children be creative and "write" in that script. So for Chinese New Year, they drew Chinese characters that they made up. There are also a few other bilingual children in Cubling's room, with at least 4 language pairs. The teachers have produced books with images of everyday objects and asked the parents to write the word in their language underneath. These booklets are on display for all children to see. This way, the bilingual children realise there are others like them (the realisation for Cubling has had a positive impact on her attitude towards German), they feel recognised and the monolingual children develop an interest in other languages. All of which is good, everybody wins. I think it's good practice because early literacy is not just about learning your letters, sounding out and reading - it's about the letter as a sign, the realisation that we can represent speech and use these representations in enhancing ways, and creating an awareness of literacy which will then result in a motivation to become literate.

And this can happen in as many scripts as you want I would think.
Posted by cartside at 10:57

That's so cool that your nursery support bilingualism like that and generally encourages and interest in written signs. I learnt Russian too by the way and actually found the script to be one of the easiest things to learn, compared for example to aspect in the verbs and the different inflections for adjectives and verbs.

Thanks for the tip about Linkwithin by the way. I put some photos in last week, but they haven't appeared yet in the links. Does it take a while?

My daughters nursery has been learning about other languages this week and even though the children are unable to read the teachers read books in a variety of languages so they could hear the different sounds. I looked at a Portugese book and a Greek book with her and we looked at differences in characters. She really enjoyed it and has asked lots of questions about languages since then. Its a really valuable insight and it sounds like your nursery supports this learning really well. I will pass on some of those ideas!

I envy you for Cubling's nursery. It's amazing how little L only spends two days at her English speaking nursery (the rest of the week she almost exclusively is surrounded by German) and already, she seems to pick up English much easier, because it's what her peers speak.

Firstly, Thankyou for commenting on our hats!
Secondly, I commented on one of your posts a while back, but then 'lost' your blog; hurray, thanks for helping me find you again! I think that learning more than one language enhances the understanding of all the languages learnt. 'The Viking' I talk about in our (mine and my daughter's) blog is my Swedish partner. My eldest boys, 5 and 7, have already started commenting on similarities and differences in the structure of both languages.

I love your matter-of-fact approach to learning two scripts along with two languages at a young age. It seems like it doesn't have to be an onerous, stressful task if you approach it with the right attitude!

I also love the idea of the multilingual book that the children's parents contribute to. While I've seen multilingual children's books, they don't interest my three-year-old at all (perhaps because most are just lists of words, not stories?). But if he knew that his classmates were represented in the book, that might capture his attention.

Oooh, and what if the illustrations were photographs from the nursery school, pictures of what they play with and what they do as part of their daily routine? With phrases and sentences ("We eat lunch," "We take a nap") in all the languages? Yeah. That would be cool. 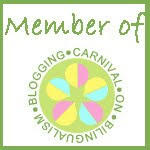